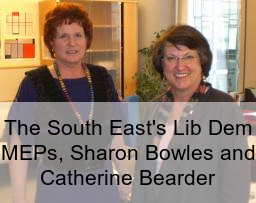 The objective of the proposal is to reduce the bureaucratic burden on micro-entities in order to enhance their competitiveness in the wake of the financial crisis.

Catherine Bearder said, "this is a ray of light for small businesses during this difficult time."

"There are around 340,000 businesses in the South East that have nine employees or less. We can therefore be very confident that this proposal would allow many small South East businesses the breathing space they need in a tough economic environment."

"Under this measure small businesses would no longer have to keep the same reporting rules as the big companies that have the time and money to produce annual accounts with ease."

"I hope the UK Government will do its best to support this proposal and seize this opportunity to lighten the bureaucratic burden for small businesses".

*Micro-entities are defined as businesses where two of the following three criteria apply: -

3. The average number of employees during the financial year is 10 or less.