Fishermen from South East England have returned triumphantly from Brussels after putting their case for reform to the most powerful decision maker on European fisheries policy. 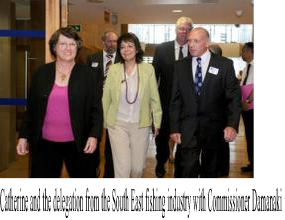 This long sought after victory came after South East Euro MP Catherine Bearder took a delegation from the fishing industry to meet with the European Commissioner for fisheries, Maria Damanaki. The state of the industry is dire and until now these fishermen have been unable to get the support of the politicians in Brussels that control their fate.

Following the meeting with the Commissioner, Catherine said, "Today was a significant victory for fishermen in South East England!"

"Our fishing fleets have waited years for a day like today - to get the support of the most powerful decision-maker on fisheries policy in Europe."

"In the UK a huge bias exists towards the big organisations and against the small boat fishing fleets. As the small boats make up 93% of the South East's fleet and employ 83% of our fishermen this just isn't fair."

"Small boat fleets fish in a more sustainable way - they make less impact upon fish stocks, are more friendly to the environment and their money goes back to the local communities that depend on them for their survival."

"Fishermen in Hastings and Eastbourne, Brighton and Worthing, Folkestone and Whitstable can be assured the Commissioner will do what she can to help them."

"But today was just the first step towards rebalancing this unfairness. The Commissioner has given us her support but we must keep up the pressure to see through the reforms we need."

After the meeting, Paul Joy, Chairman of the Hastings Fishermen's Protection Society, said, "We came away with increased hope that the Commissioner is not only now more clearly aware of the long standing problems that we face on a daily basis but is prepared to give much greater recognition and support to our sector".

"We are particularly grateful to Catherine Bearder for facilitating this meeting with the Commissioner and her senior staff. It provided us with a vital opportunity to speak face to face with the people who will determine the future for small scale fishermen across Europe."

The delegation told the Commissioner that a huge bias exists in UK fisheries towards the big organisations and against the small boat fleets (under ten meters). Their argument focused on four key points:

The under ten fleets have much closer ties to local fishing communities than the large producer organisations - there is a correlation between the decline in the under ten sector and the decline in the economic and social well being of traditional fishing communities. The money the small boat fleets make goes into the local economy. They employ local fishermen, and sustain the local tourist industry and other connected trades.

Small boat fishing fleets fish in a much more sustainable way than the big producer organisations. They cause less damage to marine habitats and ensure the survival of fish stocks through technical measures. According to DEFRA's Fisheries 2027 Policy Paper, "The wider economic, social and environmental benefits of small-scale fishing can outweigh the comparative inefficiency in harvesting the resource and make a significant economic and social contribution to the lives of individuals and coastal communities."

The quota allocations in the UK are distorted. The small boat fleet makes up 93% of our industry but received just 3% of the quota. This is a clear bias towards the big organisations. If our fishing industry is to maintain fixed quotas we must ensure they are fair. The European Commission must not allow a situation to arise again where a member state can discriminate so heavily against an important sector of this industry.

The voice of the small boat fishing industry is often ignored because it doesn't have sufficient representation in Brussels. These fleets cannot compete with the financial resources of the producer organisations, so in terms of lobbying power in Brussels the small boats are consistently overpowered. To guarantee the survival of this sector its voice must be not be ignored by decision makers.