Last night was the final of the three televised Leaders' debates. Leader of the Liberal Democrats, Nick Clegg, debated with Gordon Brown and David Cameron about the economy. Subjects discussed included breaking up the banks, creating more jobs and reinvigorating the British economy. 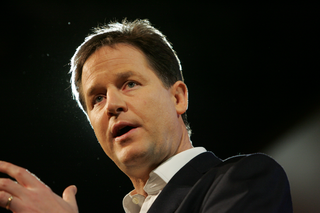 Most post-debate polls scored this final debate to David Cameron, but again put Nick Clegg clearly ahead of Gordon Brown. An analysis by pollsters Angus Reid of previously undecided voters who watched the debate gave Nick Clegg 37%, David Cameron 25%, Gordon Brown 22% and Not sure 16%. Angus Reid found that 32% of undecided voters say they are now more likely to vote for the Liberal Democrats after watching the final debate, with just 18% Conservative and 15% Labour.

"Everything I've said during these three television debates is driven by my simple belief that if we do things differently this time, we can create a fairer, better Britain.

"As you decide how to cast your vote, of course you'll be told by these two, that real change is dangerous, that it can't be done.

"Don't let anyone scare you from following your instincts. Together next week we can change Britain for good.

"Just think how many times you've been given lots of promises by these two old parties - only to discover when they get into Government that nothing really changes.

"We can do so much better than that this time.

"Of course I can't guarantee that every problem you face will be solved overnight. But I can guarantee that I will work tirelessly to deliver greater fairness for you.

"Fairer taxes, so that you pay less but people at the top pay their fair share.

"A fair start, smaller class sizes, for your children.

"A different approach to the economy.

"And open, decent politics which you can trust once again.

"When you go to vote next week, choose the future you really want. If you believe like I do that we can do things differently this time, then together we will really change Britain.

"Don't let anyone tell you it can't happen. It can. This time, you can make the difference."