UKIP's group in the European Parliament, the EFDD, has collapsed following the departure of a Latvian MEP Iveta Grigule. 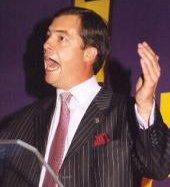 "It's not surprising that UKIP has lost friends and alienated people in the European Parliament. Just like his new MP, Nigel Farage will now have to shout from the back benches - that is if he actually bothers to turn up."