UK Government focus should be jobs, not referendum

Talk of a referendum detracts from the key issues of the day, Catherine Bearder MEP has said. 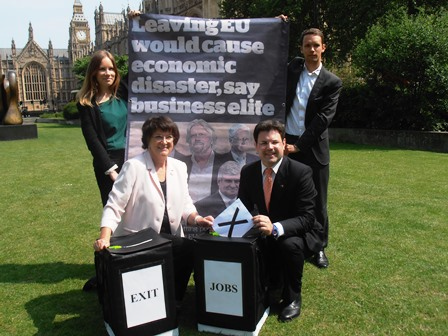 The House of Commons will vote on an EU referendum bill on Friday (July 5).

Catherine said: "This Government should focus on creating jobs, growth, stability and tackling long term issues facing the country, not a referendum which we've already legislated for.

"Yes, the EU has to change. It must be more competitive, more open, leaner and less bureaucratic. But we should be at the table, making the EU work more effectively.

"Leaving would be a calamitous mistake for this country. It would make us poorer, less safe and put at risk jobs, as well as billions of pounds of investment."

Catherine last week launched her europe4prosperity campaign, which spells out the benefit of EU membership to thousands of jobs in South East England.

She added: "Around 500,000 jobs in the South East are connected with this country's trade with EU member states, while businesses benefit from major investment.

"The Tories seem content to put all of this on the line and, while they argue, global businesses ponder whether the UK is a good long term investment.

"Recently, some of Britain's most successful business leaders accused Eurosceptic MPs of putting 'politics before economics' and abandoning the national interest.

"I couldn't agree more. Being part of the EU means tackling major challenges such as climate change and cross border crime together."