The number of tourists visiting South East England is rising as more and more visitors recognise its value as a tourist destination. 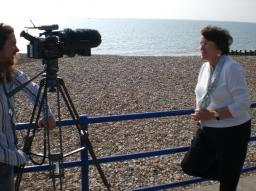 At a time when unemployment is rising across the region, the boost in tourism is leading to new hotels being opened in the South East and more jobs being created.

"More tourists are visiting the South East because they're recognising the rich diversity of our region."

"They're coming for our beautiful countryside, our historic towns and our modern cities."

"It's important for our economic recovery that people from abroad and from elsewhere in the UK come to visit the South East. They will shop in our shops, eat in our restaurants and visit our attractions - all the while creating new jobs in the South East."

"I am sure all our visitors will recommend the South East so we can expect to see their friends next year!"

The latest regional snapshot from the South East England Development Agency shows that South East unemployment rose by 1,000 in the three months to June compared to the previous three months.

A new premier Inn hotel is being built in Rochester, creating 45 jobs.

Butlins has unveiled plans for a third hotel in Bognor Regis, creating around 100 jobs.

In January to April 2010 there was a 7.5% increase in total visits to the South East when compared to the same period of the previous year.

In July 2010 occupancy rates were 7% higher than in the same month the previous year.