Too many fish in the sea? Not likely!

For too long, too many boats have been chasing too few fish. 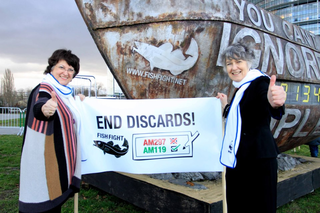 The old adage 'there's plenty more fish in the sea', ironically, seems not to apply to Europe's over fished waters.

However, the European Parliament has dropped anchor on the aggressive pillaging of the continent's seas.

On Wednesday, February 7, the European Parliament showed collective strength in striving to protect the fishing industry and biodiversity in our seas.

It has been a painfully long and drawn out process, when in reality swift consensus was needed long ago.

But an essential victory has been secured, and a clear majority that sends a positive signal to the Commission on the mood of the parliament.

It is a victory which should see fish stocks preserved for future generations.

And it is a victory which should safeguard the fishing industry amid the frenzied clamour for short-term profits.

Fresh stats from the EU Fish Processors and Traders Association highlight why drastic action was needed.

But the disaster is intensified when you begin to realise millions of tonnes of edible fish are chucked overboard every year in the craziness that is the discard regime.

It is bad practice whichever way you argue it. Fish which are not big enough, not marketable enough, or over quota are simply tossed back into the water, dead.

Discards can take a brutal toll on biodiversity in our seas and it needs to end sooner than later.

Meanwhile, with the tailing off in catches, come job losses, which have punished coastal communities, especially in the in-shore fleets.

I met fishermen in Eastbourne last year and they told me how tough life has become.

Put purely and simply, small-scale owner operated in-shore fishing in my South East constituency is in danger of dying out, and that will affect the whole communities in which they operate.

This is an issue which resonates with a lot of people, even in land-locked UK counties.

People who don't make money from fishing and people who do not even live near the sea, really care. They care about the health of the seas and of the origins and sustainability of the fish on their plates.

Last month I handed hundreds of petition cards from Eastbourne to EU fisheries commissioner Maria Damanki to prove the point.

I receive mail from concerned constituents and for them, as for me, it is about the torrid impact on our environment that the out of date Common Fisheries Policy (CFP) is having.

The vote to change the CFP will fundamentally change the way the industry operates.

Let's hope it ends discards, replenishes dwindling fish stocks and means we can stop importing so much fish.

This week's vote has been described as an historic opportunity.

This is the first time the European Parliament has had the power to vote on the CFP since the Lisbon Treaty gave it more decision making powers. But that is exactly what it is, an 'opportunity'. Only the first battle has been won.

The next step is for fisheries ministers from across Europe to step up.

I think the message from the parliament and the citizens of the EU to national governments has been bellowed loud and clear.

They must banish short-term economic interests and put the long-term sustainable future of our oceans at the top of the agenda.

The target to replenish fish stocks by 2020 is ambitious.

But I am optimistic… we can't afford to be anything else.