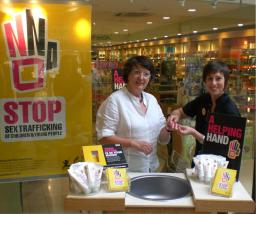 Accompanied by celebrity supporter Martine McCutcheon, anti-trafficking campaigners ECPAT UK have handed in a petition to 10 Downing Street. The petition, signed by 735,889 Britons, calls for the UK Government to introduce a guardianship system for all child victims of trafficking, to provide them with better care and support to prevent them from facing further exploitation and harm from traffickers.

After signing the petition Catherine said, "We must do what we can to stop traffickers and protect children who right now are being bought and sold as commodities."

"People need to be aware human trafficking doesn't just affect other parts of the world. It isn't just someone else's problem; it's our problem and it's happening here."

"People traffickers have no respect for borders so governments must act together to stop this terrible crime. The size of this global campaign led by ECPAT shows the strength of our commitment to stopping trafficking."

"The UK Government has taken a strong stand against trafficking by taking part in the new EU Trafficking Directive. The directive will help the police catch trafficking gangs, to convict traffickers and will dramatically improve our care for trafficking's victims."

"But it must do more. A system of guardianship will mean child victims of trafficking will get the care and support that's needed to stop them from falling back into the clutches of traffickers."

Children who have been trafficked will often have faced appalling situations of exploitation and abuse. They desperately need the support of a designated adult. Providing guardianship is hugely important:

The petition activity is replicated in some 50 countries around the world where The Body Shop has a presence. Globally, petition signatures currently stand at 5.9 million. Once presented to their national governments all of the petitions will be amalgamated and presented as one to the United Nations. In Europe, legislation has been positively strengthened by the signing of the new EU Directive on Trafficking by EU Justice Ministers in December 2010. This introduced new laws for all its member states with a particular emphasis on the trafficking of children and young people.