Time to listen to young people across Europe… that is the message from Catherine Bearder MEP. 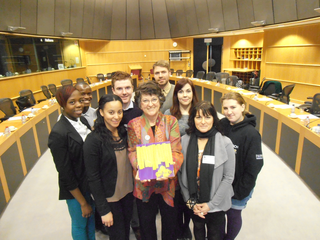 Catherine hosted BtB (Bite the Ballot) and WIMPS (Where is My Public Servant) in Brussels as they launched an initiative aimed at boosting young voter registration ahead of the 2014 European elections.

The aim was to build interest in the 'Rock Enrol' campaign and encourage Members of the European Parliament to put young people at the top of the agenda.

Catherine said: "I have worked closely with Bite the Ballot, so I understand the group's passion and enthusiasm to engage more young people in politics.

"There is a huge number of young people across Europe who feel disengaged from the political system, but are impacted by decisions made every day.

"If they all turned up to vote on polling day they would have a major say in who won the election. It is vitally important not only talk to young people, but listen to what they have to say."

Both BtB and WIMPS outlined the plan to sign up young voters ahead of the Euro election in May 2014 at Thursday's event.

Catherine added: "I know BtB has a great track record in encouraging young people to vote. 4,000 youngsters have now enrolled thanks to its hard work."

You can find out more about the campaign at www.bitetheballot.co.uk.