Guitarist Brian May has today taken his fight to stop the UK badger cull to the European Parliament. 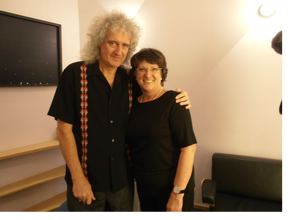 Mr May is angry at the Government's decision to push ahead with a cull of badgers in an effort tackle tuberculosis in cattle.

Activists believe it will have an insignificant effect in cutting disease in livestock and want more focus on vaccination.

And Catherine Bearder, an MEP for the South East, met Mr May to discuss her opposition to the cull.

She said: "Few would argue the spread of TB across the countryside needs to be stopped, but culling is not the solution.

"More research is being carried out to create more effective vaccines and that is where our energy must be concentrated."

Cull supporters think the move is vital to stop TB spreading from wild animals to cattle and could save farmers millions of pounds.

But Catherine added: "Science has moved on from the original Krebs report. Vaccinating cattle is an option and can now be traced.

"It is the European Commission which must change the rules and we need to persuade them to do so.

"I spend a lot of time urging developing countries to protect their wildlife. How can we think it is ok to cull our indigenous and protected animals?

"We must protect them and use science to support farmers."

Cull licences have already been issued in West Somerset and Gloucestershire.