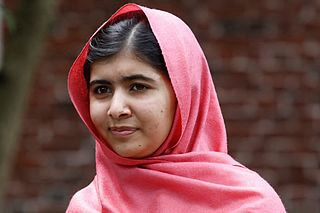 Malala Yousafzai is a young Pakistani school girl who took to a blog to protest against the Pakistani Taliban's closure of girls schools in her region of the Swat valley.

In October last year, once her school had re-opened, she was shot in the head and neck in an assassination attempt by Taliban gunmen while returning home on a school bus.

Since the attempt on her life, and medical treatment in the UK, she has captured the attention of the world in her fight for access to education for young girls.

"This prize is not just for Malala but for the millions of other girls and boys worldwide, Muslim and non-Muslim who, like her, have been denied their universal right to education. She now personifies the fight for that right with her 'weapons of books and pens'.

"In their attempt to silence her voice, her oppressors have amplified it. The Taliban's renewed threats of violence against her go to show yet again just how a single 16 year old girl has managed to put a spotlight on and completely humiliate them.

"Hers is a story of David and Goliath, and by awarding Malala the 25th Sakharov prize we are putting the European Parliament's full weight behind the fight for education for all - which is after all the most powerful tool we have for world development."