Catherine Bearder MEP has met with representatives from Kent Police to discuss the controversial Operation Stack. 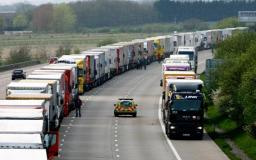 Operation Stack is carried out by Kent Police whenever the Channel Tunnel or Ferry ports in Kent are closed. The M20 motorway is used as a car park for goods vehicles waiting to cross the channel. Whenever Operation Stack occurs there is huge disruption to local communities in Kent.

"Operation Stack was meant to be used in exceptional circumstances but it's occurring far too frequently."

"We need to find a better alternative to dealing with congestion when drivers can't cross the Channel."

"Operation Stack not only causes huge disruption to local communities, it comes at a very high cost to the police. The money it costs to carry out Operation Stack could be used elsewhere."

"I've heard some interesting ideas from local groups on alternatives and I hope to explore some of them in more detail."

"There is much debate over what could replace Operation Stack, but what unites all sides is a common belief that Operation Stack is not the solution."