A cross-party group of MEPs and coalition of NGOs were launched yesterday to put wildlife crime at the top of the EU's agenda. 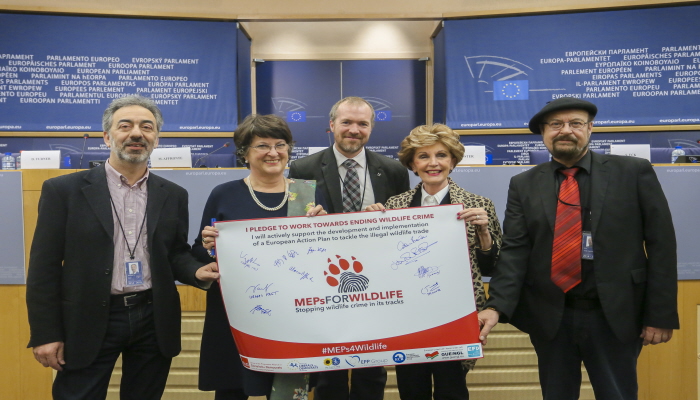 Founded by Liberal Democrat MEP Catherine Bearder, "MEPs for Wildlife" will be led by one MEP from each of the European Parliament's seven political groups. Its central aim will be to increase the pressure on the Commission to propose and implement an EU Action Plan to tackle wildlife crime. It will be assisted in its work by a broad coalition of NGOs including the WWF, Wildlife Conservation Society, IFAW and Born Free Foundation.

While the EU does play a role in combatting the illegal trade, including through a €12.3 million fund to reduce illegal killing of elephants and other endangered species, it lacks a comprehensive action plan that would ensure effective measures are proposed across different policy areas.

Speaking at the launch of the group, Catherine Bearder said:

"Wildlife crime is now the fourth largest illegal trade in the world.

"As well as driving many endangered species to the brink of extinction, it has become a lucrative source of income for armed groups and a growing threat to international security.

"A comprehensive EU Action Plan would ensure that coordinated action is taken across all areas, from development aid to justice and home affairs.

"There is a lot of public support and strong justification for EU action against wildlife crime. If the Commission wants to show why the EU is relevant to European citizens, this is an open goal."

The Conservation Community welcomes the formation of MEPs for Wildlife group, and looks forward to working closely with MEPs, Member States and the Commission to achieve meaningful and effective action on Illegal Wildlife Trade.'

"The MEPs for Wildlife group has a vital role to play in ensuring that the EU delivers an effective and rapidly implemented Action Plan to tackle wildlife crime. This should support both internal and external measures to improve law enforcement, disrupt the organised crime syndicates behind the illegal trade and conserve species at risk.

"The Born Free Foundation, along with other non-governmental organisations, stands ready to assist, advise and support MEPs for Wildlife in their vitally important mission."