Last week it emerged that over 70% of chickens sold in British supermarkets are contaminated with the food-poisoning bug campylobacter. 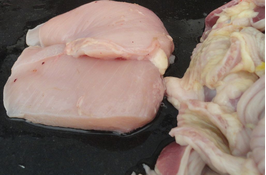 Campylobacter causes an estimated 9 million cases of food poisoning a year across the EU. Studies suggest that putting in place strict EU limits, similar to those already in place for salmonella, could reduce the risk it poses to public health by up to 90%. Salmonella cases have been halved since the EU introduced limits in 2004.

"The poultry industry needs to clean up its act - at the moment lax standards are putting millions of people at risk of food poisoning.

"Putting in place tough EU limits would force the industry to take action and give consumers the confidence that the chicken they buy is safe to eat.

"A quarter of the chickens sold in the UK are imported from Europe so it's vital that we get tough standards put in place across the EU.