Catherine ponders the impact of the London games and looks ahead to the Paralympics...

There's no sprint canoe to watch, no games of Handball to cheer and no Team GB medals to celebrate. 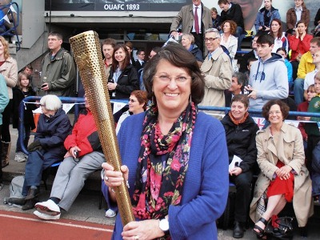 Nobody knows what to do with their red button!

How will we fill our evenings? Well, deep breath, at least there's the Paralympics in a couple of weeks.

So, while we wait let's reflect on an unbelievable two weeks and start to take advantage of foundations which have been laid.

As a member of the European Parliament, I was struck by the number of fans who flocked across the Channel.

There were big pockets of orange-clad Dutch fans in the hockey arena, hundreds of Hungarians at Dorney Lake and swathes of Swedes in the Copperbox.

London was accessible and welcoming to fans from Europe. It is clear many took advantage of their rights to travel freely across the EU.

Then there was the great story of Ruta Meilutyte, the teenage swimming sensation.

Her family moved from Lithuania and the youngster studied and trained at Plymouth College. She is now a gold medallist.

Coaches work in countries other than their own and while athletes represent their own country, it doesn't mean they still live there!

Since the Olympics in Barcelona in 1992 a further 15 countries have joined the European Union. We now stand at 27 member states.

Borders - in Europe - are less important. Thanks to the EU, it's easier for our sportsmen and women to move around, as every EU citizen has the right to live work and learn in any EU country.

Does it mean we are losing our identity? Has the EU meant we have felt any less British in the last two weeks? No way!

The Olympics celebrates our natural patriotism at its strongest and flag-waving celebrations at their most joyous. The EU protects and welcomes our right to do so too.

On reflection, that will be my abiding memory.

We opened our arms to Europe and the world and we discovered it made us stronger and happier, but no less proud to be British.

And we can look forward to celebrating it all again at the Paralympics.