Liberals from across the EU meet in Tallinn, Estonia

Catherine joined members of the Liberal Democrats from the UK at a meeting of ELDR in Tallinn, Estonia this weekend (13th -14th April). 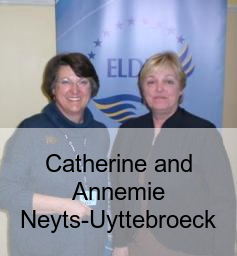 This was the 54th ELDR Council Meeting and saw three new member parties join the European liberal family, the first phase of the drafting of the ELDR manifesto for the 2009 European elections and two crucial statements on the recent political and judicial developments in Turkey and in Tibet.

Catherine said" I am delighted that the three new three parties have joined to our European liberal family. The growing appeal of liberal ideas and values in Europe and the role of ELDR in supporting and communicating such principles is welcomed and a demonstration of the strength of Liberal thinking in peoples of Europe".

Estonian Prime Minister Andrus Ansip also participated in the meeting and stated "in conditions of a cooling world economy the threat of protectionist ideas is growing. Therefore good results for liberals in 2009 European Parliament elections are extra important - in order to stand for freedom, free market and other basic liberal values." Also at the meeting was the Prime Minister of Denmark, Anders Fogh Rasmussen and Graham Watson MEP, Leader of the ALDE Group in the European parliament.

The political discussion of the Council focused on foreign, security and defence policy. The final ELDR electoral programme will be adopted by the ELDR Congress on 30 and 31 October 2008 in Stockholm.

The programme continued on Saturday 12th April when representatives of liberal political parties from all over Europe discussed, during a crowded seminar, the techniques and communication strategies for the upcoming EU elections in the presence of Joe Hansen, member of the US Democratic Party and political consultant involved in the US presidential campaign.