This week, Catherine Bearder put her full backing behind a campaign led by local Liberal Democrats to save the Green Belt in Windsor and Maidenhead. 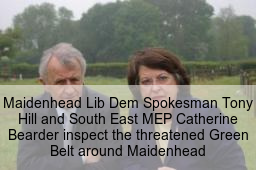 Having stood in the 2007 elections on a platform of defending Windsor & Maidenhead's Green Belt the local Conservative Council has completed a complete U-Turn and is now conducting a "Green Belt Review" that will see areas of the Green Belt around Windsor, Maidenhead compromised.

The Lib Dems in these areas are calling on Windsor & Maidenhead's Conservative Council to curb intrusion into the Green Belt and find other solutions instead. And they have the complete support of their local MEP Catherine Bearder.

Commenting on the campaign, Catherine said: "It is crucial that as many of the people of Windsor and Maidenhead as possible get behind this campaign to ensure that the Council keeps it's pledge to defend the beautiful environment that surrounds them. I have visited these areas, and preserving this natural beauty should be a priority for all in Windsor and Maidenhead"

You can start to show your support by joining the Facebook campaign as Catherine at http://www.facebook.com/group.php?gid=64275104709