A petition loaded with over one million signatures aimed at stopping long distance transport of animals for slaughter has today (Thursday) been handed to the European Commission. 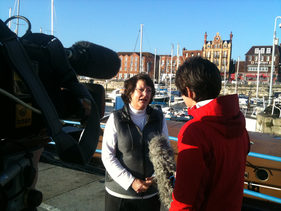 The '8hrs Campaign' calls on the European Union to toughen up its rules on the length of journeys truckloads of animals are forced to endure on their way to the slaughterhouse.

Kent activists have been at the forefront of the fight and have staged protests at Ramsgate over the last 12 months.

South East MEP Catherine Bearder has joined campaigners at the port, which has been used for animal shipments since damage to Dover last year.

She said: "Europe is speaking with one voice… eight hours is more than enough for live animal transport, the regulation must change."

"But it is not just about animal cruelty. It is surely better for animals to be slaughtered at home - which means business to British abattoirs - and exported as British meat.

"At the moment, there are loopholes which means animals can be labelled as 'produced' in a country, when they are not reared, but simply imported and slaughtered."

Ian Driver, a Thanet and Ramsgate councillor, as well as founder of Thanet Against Live Exports, has been involved in the campaign since June 2011.

He said: "The petition is proof of how strongly people feel about the issue, which is really encouraging. We are getting close to a change, but there is more work to be done."

The petition has been signed by 1,103,248 people and was handed to Commissioner John Dalli following a meeting with MEPs.

In March, the European Parliament adopted a written declaration, which calls on the commission to establish a maximum eight hour limit for animals being taken to slaughter.

Catherine added: "In Kent, the sterling effort of Thanet Against Live Exports has put the issue high up on the agenda and I hope the commission takes note of the strength of feeling."

Ramsgate saw shipments involving 53,123 sheep and 7,717 calves between May and October last year.