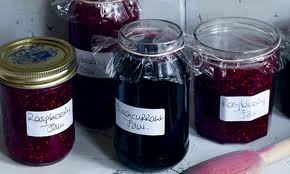 Here is the text of a letter I recently wrote in response to a letter published in the Oxford Mail amid fears a European Union decision was set to impact on jam makers.

I am not surprised when people become exasperated by the European Union… because they are rarely presented with the facts!

Your 'On the Spot' letter on Thursday, October 11 - "once again the EU is poking its nose into our way of life" - was a case in point.

Recent media coverage on an EU ban on reusing jars for homemade jams for sale at charity events managed to whip up a frenzy.

But, rest assured, it was completely untrue.

There is indeed a body of EU food safety and hygiene legislation - notably so the UK and other countries can be confident food imported from or bought elsewhere in the EU is safe and of high quality.

But these rules apply only to businesses and not to those preparing food for charity events, such as church fetes, school bazaars or the WI.

It should also be mentioned that amid the flurry of misleading 'meddling Brussels bureaucrat' headlines, the Commission was not contacted for comment.