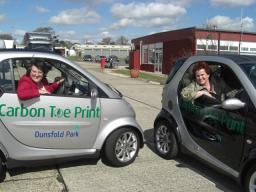 And new figures show new car registrations jumped 5.3 per cent in the UK in 2012, as people traded in older cars for modern replacements.

Catherine said: "Over the last five years EU measures have required a 15 per cent improvement in fuel efficiency and reduced carbon dioxide emissions for all new cars sold anywhere in the 27 member states.

"It means a better deal for drivers and the environment."

Targets for the next five years mean by 2020 drivers should be saving more than £400 per year, while contributing to a reduction in global warming.

Catherine said: "I regularly hear from constituents about the high cost of fuel is causing serious problems in their day-to-day lives.

"When people trade up to a newer car they want to see an immediate payback by filling their fuel tank less often for the same distance travelled.

"EU laws that force car manufacturers to up their game and produce cars that go further on less fuel will save commuters hundreds of pounds and cut down on carbon dioxide emissions at the same time.