Guildford's own Beth Jennings went to the European Parliament this week in Brussels to talk about the cruel hunting trade in Southern Africa.

This trade known as "canned hunting" raises captive lions, making money at every stage before these tame lions are shot by tourist hunters and made into "hunting trophies". 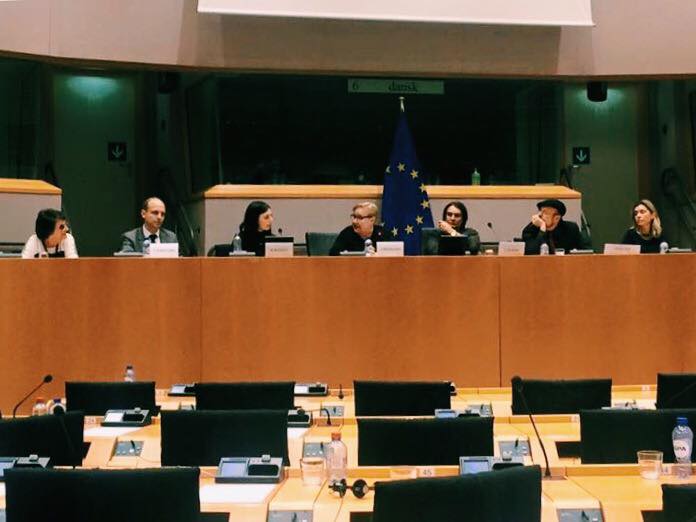 Last summer Ms Jennings was duped when she paid over a £1000 to volunteer in what she was told was a "lion sanctuary". The real purpose of the sanctuary was to raise the lion cubs so that they could later be shot by tourist hunters.

Ms Jennings explained how there are numerous operators offering what seem like genuine experiences with lion orphans for young gap year volunteers from the UK. These are not orphaned lions, but cubs taken from their mothers at two weeks old to be hand reared.

The whole "canned hunting" trade itself is very lucrative. A single male lion hunt brings in £20,000. Tourists from The USA and Europe shoot lions and have the remains sent back to their home as a "hunting trophy".

Ms Jennings joined Guildford's MEP Catherine Bearder, lion charities and the director of the documentary film "Blood Lions" Ian Michler to discuss the brutal trade and her first-hand experience of it.

"As a volunteer with first-hand experience of cub petting and canned hunting, I was invited to attend the European Parliament for a screening of Blood Lions and a panel debate.

"This was the first time I had seen the film and cannot congratulate Ian Michler and his team enough. They have created an emotive and informative documentary that is already making a difference for our lions and I am so proud to have been a part of the campaign."

Catherine Bearder MEP, who established the cross-party group called "MEPS for Wildlife" which is calling for the EU to ban the import of lion hunting trophies, commented:

"Beth told me how she had been tricked into this cruel trade and that there are many other young people out there who do not realise they are raising lion cubs to be shot.

'I want to lift the lid on the brutal lion trade in Southern Africa and prevent young people in the UK being tricked like Beth was.

"I am pushing for a full ban on imports of lion hunting trophies into the EU. It won't be easy, but that's not going to stop us from trying."