Green or a Deeper Shade of Blue? 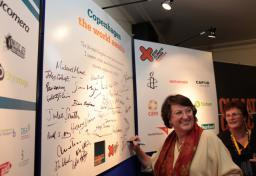 Last week in the European Parliament two Tory MEPs, Daniel Hannan and Roger Helmer, voted against a motion calling for the Copenhagen talks to agree an 80 per cent cut in emissions by 2050. They were among 18 members of the breakaway European Conservatives and Reformists Group, including its Polish leader Michal Kaminski, to oppose such a deal.

A debate was also held on the EU strategy for the Copenhagen Conference on Climate Change. Conservative MEP Martin Callanan tabled an amendment that would have removed the EU-wide commitment to provide "new and additional" money for funding mitigation and adaptation measures for the developing countries that are suffering from man-made climate change. The amendment was massively defeated by 33 votes to 638.

In a separate amendment, the Conservatives opposed the Parliament's long-standing position that part of the money raised by the European Emissions Trading Scheme should be earmarked for developing countries' climate change needs. This was defeated by 78 votes to 588.

Euro MP for South East England, Catherine Bearder, said "the Tory mask has slipped, revealing that underneath they are still the nasty party."

"The developing world emits a tiny fraction of global carbon but bears the worst impact of climate change. We need additional money to deal with a growing problem.

"It is disgraceful that the Tories are trying to duck out of this responsibility. What happened to their commitment to the environment, and to the developing world?"

"MEPs have voted against this mean-spirited effort to short-change the world's poorest people: the Tories should be ashamed of themselves."