Catherine Bearder MEP has welcomed yesterday's announcement that the government are drafting up proposals to apply for EU solidarity funding to help flood-affected communities across the UK. 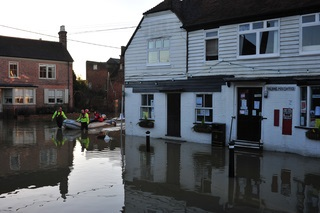 Catherine and her Lib Dem colleagues obtained assurance from the EU commissioner responsible for solidarity funding that the UK would be eligible back in January.

The South East MEP wrote to Owen Paterson MP in January to encourage him to apply for the EU funding to help the South East which has been blighted by floods over the Christmas and New Year period.

The EU Solidarity Fund, with a budget of up to £414 million for 2014, was set up to provide financial assistance to EU countries struck by major national disasters.

When the 2007 floods hit, the UK was granted £134 million from the fund to help with the clean up process.

"I am thrilled the government have finally seen sense. I know there is certainly a lot of work to do to recover from the floods for many communities in the South East. These EU funds could really offer a much speedier recovery.

"The government have left the application process late but we are still within the 10-week window from when the floods began.

"The UK contributes to the EU so it is only right we should benefit from these funds which will mean the national government is not hit so hard in the pocket.

"I am also lobbying County Councils to apply for Regional Development Funding which could be used to help repair and develop flood defences for the future."