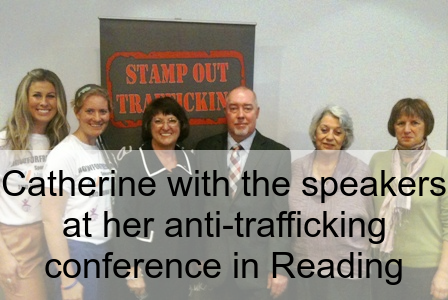 On Thursday, Catherine was invited by the Tunbridge Wells United Nations Association to talk about the scale of human trafficking in the UK and was joined by Cliff Grieve, Chair of the Kent Community Against Trafficking (KCAT) to talk about what is and can be done to tackle the problems in Kent.

After the event Catherine commented:

"I was delighted to get the opportunity to speak about this issue so close to my heart and was particularly pleased that Cliff was there to demonstrate what people in Kent can do to fight human trafficking in their community."

On Saturday, Catherine hosted a conference with the Women Liberal Democrats in Reading with the goal of creating more community groups, like KCAT, across the South East. The speakers included a recently retired senior police officer with experience of fight trafficking on the front line and two women who later this year are rowing the Atlantic to raise money and awareness for human trafficking charities.

"After hearing from our brilliant speakers about what can and needs to be done to fight trafficking I was so pleased that we were able to pull groups of people together with the common goal of tackling trafficking where they live.

"I look forward to providing any help I can in the setting up of more Communities Against Trafficking."

Another group Catherine has been working closely with is the Oxford Community Against Trafficking (OXCAT). Today, they were in the centre of Oxford holding a mock-sale of trafficked girls in the town centre. OXCAT have also arranged for posters to be placed in bus stops across the city highlighting a particular recent case of human trafficking in the city.

"This was a fantastic event and they really got their point across when, at one o'clock, over 100 people stopped and wore blindfolds to highlight that we all need to open our eyes to human trafficking.

"OXCAT are a great example of what can be done to raise awareness of human trafficking in your community and I look forward to working with them more in the future.

"Trafficking is a global problem but it is also a local issue and we all need to open our eyes and see what we can do in our community."