Extra seats and services to ease the strain on commuters 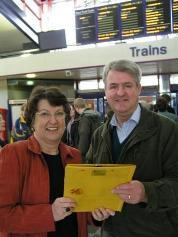 First Great Western (FGW) wants to add around 4,500 seats at on services at peak times from London to Didcot and Oxford, as well as into South Wales and the West Country.

The announcement will also mean new trains from Paddington through Berkshire and Oxfordshire to Worcester, with new services timetabled between Reading and Basingstoke.

Catherine has campaigned at the European Parliament for improvements to the rail network, including encouraging freight to shunt from road to rail and waterways.

She said: "I regularly travel on packed trains so I know what good news this will be for commuters across the South East who frequently endure crowded carriages.

"But I hope this is backed up by fresh investment into stations. Some stations have short platforms, so the infrastructure needs to be in place to cope with bigger and better train services."

The expanded services could come into operation between February and September next year and are expected to cost FGW around £29m.