Eurostar has been asked to explain its emergency plan after travellers were stranded on trains for up to nine hours. 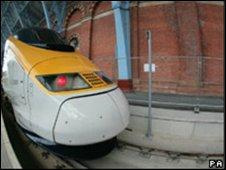 Services were disrupted last night (Monday, March 5) after a power supply problem meant services came to a halt between Lille and Paris.

It came after some passengers reported being stranded without food or water, while others complained about a lack of updates from crew.

Catherine was one of thousands of travellers caught up in long delays following heavy snow in December 2009.

She said: "It is now over two years since an independent report was published into the problems that occurred in 2009.

"I was impressed with the work to ensure similar levels of chaos would not be experienced by future passengers.

"But, hearing about yesterday's problems, I am keen to learn if the lessons of two years ago have been actually been heeded?"

Eurostar had outlined ways it intended to improve its service, which included staff training and how it would cope with long delays in the future.

Now Catherine has written to Richard Morris, director of business and service continuity, to ask whether lessons have been learned.

She added: "I appreciate the circumstances surrounding this disruption differed to two years ago. But I would have hoped the same problems could have been avoided."