The Liberal Democrats have launched their campaign for the European elections in the South East region. 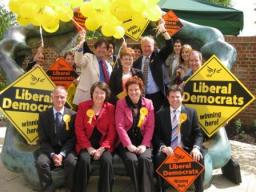 At a rally in Romsey town centre Catherine, Sharon Bowles and other Liberal Democrat Euro candidates, Jim Barnard and Anthony Hook were joined by Romsey MP, Sandra Gidley. The group took the opportunity to discuss issues affecting local people, and visit local traders at the market, and meet local business leaders at the town hall.

Catherine commented that: "Here in the South East we gain a lot from working with other European countries. Local businesses in towns like Romsey do a huge amount of trade with European companies which brings millions of pounds into the local economy.

"It is vital that Britain has a strong voice in Europe, and takes the lead on crucial issues such as pulling us out of Gordon Brown's recession or fighting crime across Europe. Burying our heads in the sand is only going to hurt Britain. We need to get Europe working better for everyone, and by voting Liberal Democrat on June 4th we can really make a difference to local people, their jobs and their families."

Sharon added, "We're just weeks away from polling day in the European elections and the Liberal Democrats are leading the fight to get a better deal for British taxpayers in Europe. We want to make sure that we are taking a strong line and are working with our European neighbours to get the biggest benefits possible from Europe."

Sandra Gidley MP took the opportunity to praise the great work done by Sharon in recent months in protecting local industries. She said "Here in Romsey Labour's recession is starting to bite hard, but thanks to Sharon's good work in Europe some local industries have not been hit as hard as they could have been if we were isolated in the way the other parties want us to be. The Liberal Democrats are the only party who have always campaigned for Britain to be a strong player in the EU and I am proud of our own MEP's record there."