Plans to cut the EU's research budget by over £2 billion have been met with stiff opposition from Liberal Democrat MEP Catherine Bearder, who fears UK universities could see their funding cut. 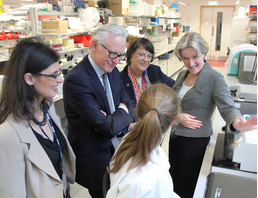 Since 2007 universities in the UK have received over £5 billion of EU research funding,  more than any other country except Germany. However, a proposal by Commission  President Juncker would see £2 billion transferred from the EU's Horizon 2020 research  programme to a new EU Investment Fund focused on "strategic investments."

A number of universities and researchers are concerned this could lead to funding  being spent on short-term projects for political gain rather than forward-thinking  research.

Catherine Bearder MEP is demanding assurances that any funding diverted from the EU  science budget is still invested in research and innovation, in a motion put for forward  by the Liberal group which was voted on today in the European Parliament.

"EU research funding is a real catalyst for innovation and jobs. If we are serious about investing in future growth then cutting this funding is clearly the wrong way to go.

"I want to see assurances that any diverted funds will still be spent on scientific research so vital projects do not lose out."

President and Vice Chancellor of the University of Surrey, Professor Sir Christopher Snowden, said: "Horizon 2020, which has been exhaustively planned, is an essential enabling mechanism for the delivery of high quality research and its exploitation through industry and other routes.

"A significant reduction in the budget runs the considerable risk of weakening the research base and, ultimately, damaging economic prosperity within the EU.

"Such a move should be resisted at all costs."

Mrs Bearder's concerns have been echoed by the League of European Research Universities which has issued a statement condemning the plans.