On Sunday 18th October, Euro MP for Oxford Catherine Bearder met with local residents and students to celebrate EU Anti-Trafficking Day. The Royal Blenheim pub in central Oxford was selling the locally brewed William Wilberforce Freedom Ale* to commemorate the day, and 10% of the brewery's profits on this beer are donated to Stop The Traffik. 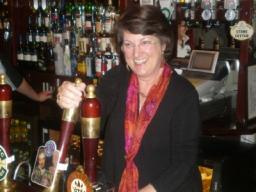 "It was great to see so many people out to raise awareness of this abhorrent crime. People are being trafficked all over the world, including right here in Oxford, and we can't let it continue. If people learn more about how people are being sold as commodities behind closed doors then we'll be one step closer to taking proper action to stop it."

"The trafficking industry earns twice as much money world wide as coca cola."

"Cooperation on policing operations in Europe has improved but there is still much more to be done. The Labour Government, for example, needs to stop delaying ratification of the Council of Europe's Convention on the Protection of Children against Sexual Exploitation and Sexual Abuse."

"It's about time the issue of human trafficking was given a higher position on the Government's agenda."