Wow! Have you caught your breath yet? Here I find myself writing to you after what has possibly been the most manic month in British politics I can remember in recent history. With a General Election being announced just weeks before our County elections and Manchester Gorton by-election our resolve was tested.

But Lib Dems passed the test - and did really well this Thursday under very tough conditions. I am proud with the results we saw across the country - with areas of council seats turning golden, but sadly some missing out by a handful of votes, including my son in Oxfordshire by 95 votes.  In Northumberland we took control of the council by one seat, decided on the drawing of straws with a dead heat with votes!

That's much too close, but I'm glad for the people there that they will have LDs working hard for them locally. 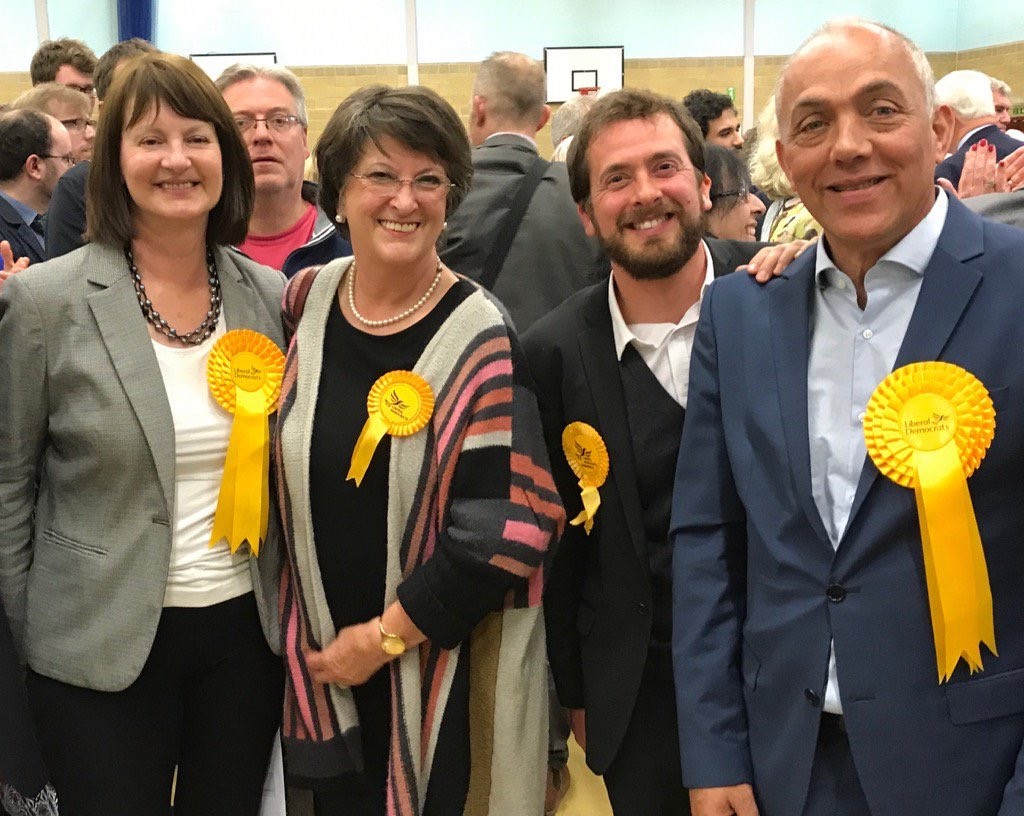 At the count in Abingdon with Liz Leffman Witney by election champion - who gains her seat, my son Tim and Andy Graham

But a special mention should go to my own parliamentary caseworker, Will Forster who won his seat on Surrey County Council. Well done Will, you'll continue to make a great councillor for those you represent.

I would also like to say a massive thank you to Jackie Pearcey - her energy early on in the campaign will stand her in excellent stead on June 8th.

Well done to all of you on these excellent results and thank you in advance for all the work you will do as Liberal Democrat Councillors.

Off we go again! 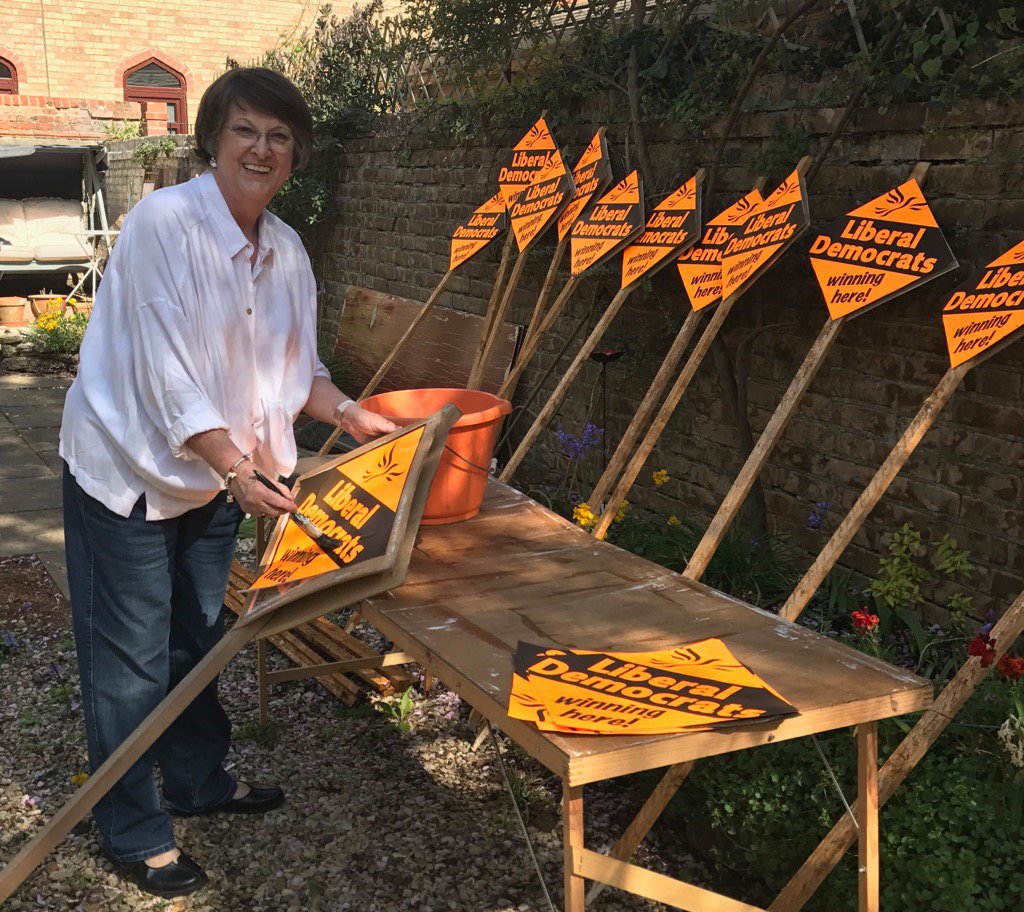 The results this Thursday provide a wonderful springboard for June 8th. They have ensured the Liberal Democrats are even more relevant to the election story, it shows that the fight back continues and will provide us all with impetus and information we need to see us through to the General Election (even though we might be a little short on energy!  My first job was to be pressed into making the garden stakeboards!  If you would like a poster for your garden or window, do contact your local Lib Demteam, the sooner they are up the better.

Mrs May claimed she was calling this General Election because Parliament didn't reflect the public - who are now united behind Brexit - in her mind. Nonsense. Never have I known the country to be more disunited - her Hard Brexit agenda has served to widen the chasm between the 48% and the 52%.

Mrs May's answer? To call the election to effectively silence those in parliament who may have wanted to stand up for the 48% and seek to unite the country by championing a softer Brexit. This shows the lengths she is prepared to go to to drive the country down the route of a hard Brexit.

But this election is a huge opportunity for us to position ourselves as the country's official opposition. This is our chance to change Britain's future. We can stop a disastrous Hard Brexit and keep Britain in the Single Market. We can provide the strong opposition to fight for an open, tolerant and united Britain.  It won't be easy, but going for the easy option is not the route Lib Dems find themselves in often, but we fight on!

I will be holding a roadshow, touring the South East during the week of 22nd May - if you have any special requests please do not hesitate to get in touch with me on: [email protected] and I will do my very best to try to accommodate you.

There are so many ways you can get involved - by attending a local event, joining our volunteer list to find out more or by donating - anything at all you can do to support our massive campaign will be hugely appreciated.

Meeting one of the world's largest hunting organisations 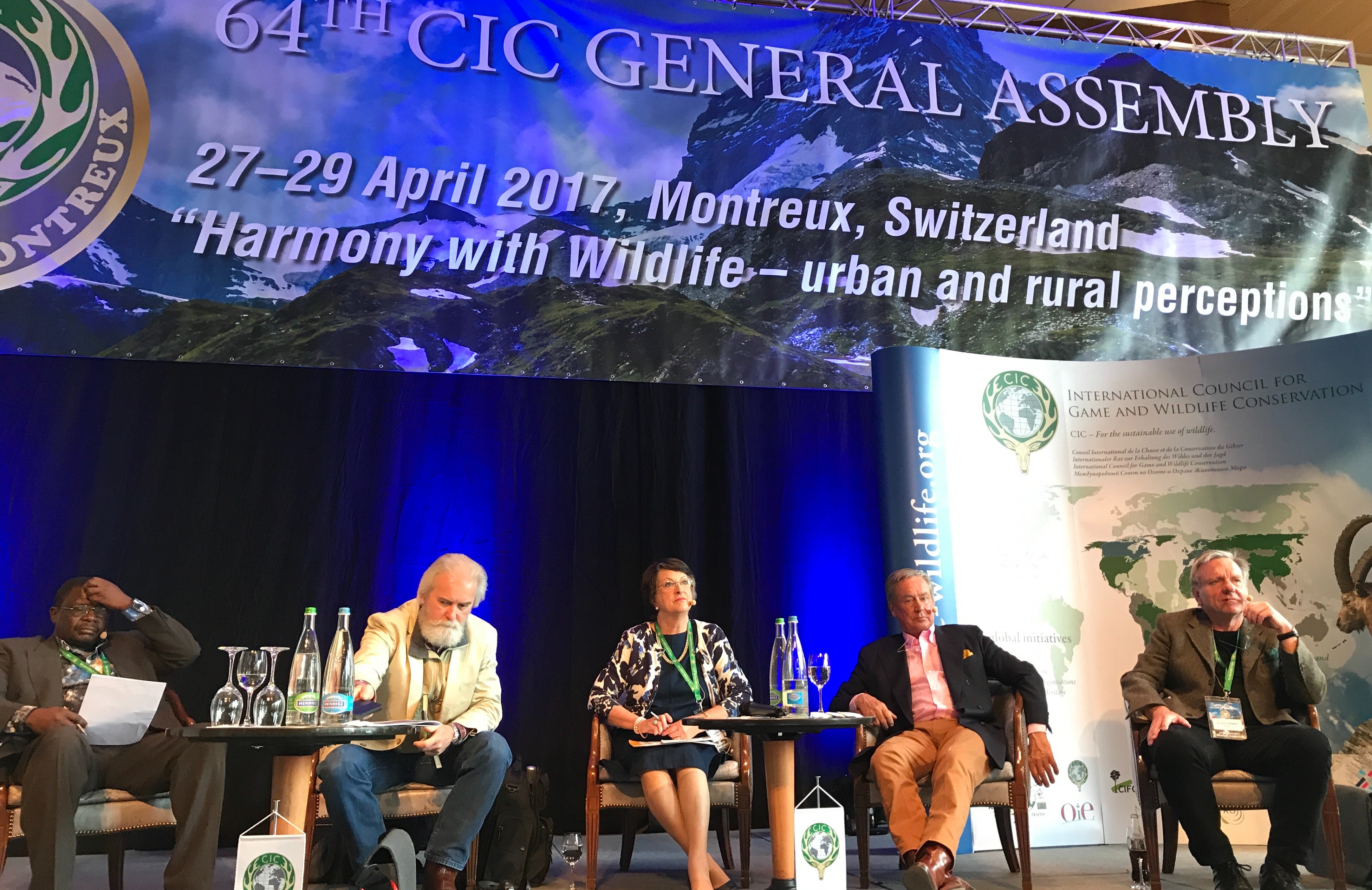 What’s your problem with hunting? That was a question I was asked in Switzerland during a debate at the General Assembly of one of the world's largest hunting organisations - The International Council for Game and Wildlife Conservation (CIC).

Those of you who know my views on trophy hunting are probably wondering why I was there. But for me this was an opportunity to engage with hunters and discuss the impact their activity is having on biodiversity and wildlife conservation.

While I was the only panellist calling for a complete ban on trophy hunting imports, and my audience were not hugely enamoured with my stance, and for 2.5 hours i felt a little like the hunted prey!

But I managed to get my point across that there are more sustainable ways to conserve wildlife - hunters often argue that trophy hunting provides a source of income for local communities. But there are other ways to do this - in 2013 the UN World Tourism organisation stated that international tourism to Africa that year reached US$ 34.2 billion. But the majority of this was from wildlife watching, not hunting.

There will be very important work in the coming months and years with this organisation to ensure the debate for them is widened.

Last Saturday, the European Council, the body made up of European leaders, published a report which shows that European governments have tightened up their position on Brexit negotiations.

Most fundamentally, the new rules state that any deal struck between the UK and the EU must respect EU rules.

I was also pleased to see the Council have demanded that EU citizens who have lived in the UK for five years acquire permanent residence rights. The Council will order that Home Office application procedures are streamlined to aid in resolving the widely reported problems encountered by EU nationals legally seeking permanent residency. It is quite frankly embarrassing that Mrs May repeatedly refuses to give these people the respect and certainty they deserve.

This beefed up position from EU governments is a direct result of her party’s shameful attitude towards EU citizens in the UK who have been waiting almost a year to discover whether or not their future in Britain is secure. It is becoming clearer and clearer that these negotiations will be very difficult for Mrs May and will take longer than the originally suggested period of two years.

It also shows that, far from taking back control, these new rules will mean the UK is bound by EU rules without a seat at the table to shape them.