Euro MP for the South East, Catherine Bearder, has expressed her huge disappointment at the UN Conference on Climate Change in Copenhagen. 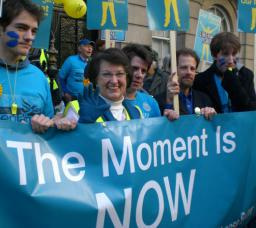 After two weeks of negotiations world leaders failed to come to an agreement on the best way to tackle climate change. Limited progress was made on the most important issues and once again we are asking, what needs to happen before governments will act to tackle the climate crisis?

Last month the European Parliament came to an agreement with the ACP countries* on climate change at a meeting in Angola. Agreement was reached on cuts to carbon emission and on aid to assist developing countries tackle climate change. However, this agreement seems to have been ignored by the Heads of Government at the Copenhagen Conference.

As a member of the EU's delegation to the EU-ACP Joint Parliamentary Assembly, Catherine said, "for months we have all hoped that Copenhagen would be the moment when the world got together and said we will tackle climate change. But our leaders have let us all down. There is no legally binding commitment and no sufficient agreement on emissions cuts or aid."

"I was in Angola last month where we made agreements on all of these issues and I know that If ever there was a time when we had the political will to tackle climate change it was now."

"It's so disappointing that our Heads of Government don't share our conviction."

"I hope the New Year will bring new talks and greater effort to work towards the agreement our world is so desperately screaming out for."