Following the General Election whose result is still to be resolved it has been a mixed night for the Liberal Democrats. Nationally, we gained a greater number of votes and a greater percentage of the vote than ever before, but we lost seats. 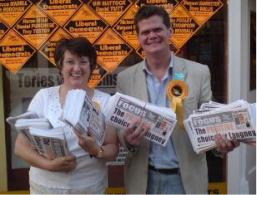 There are a few key results in the South East to highlight. Firstly, my warmest congratulations go to Stephen Lloyd who, after years of hard work and a great campaign, is rewarded as the new MP for Eastbourne. I've known Stephen for over ten years, and no one deserves this success more. He will be an excellent addition to the Lib Dem parliamentary team and a great representative for Eastbourne.

It was also a night of great loss and we have lost two fine representatives in Evan Harris and Sandra Gidley. Their constituencies, the party and the country are worse off without the strong voices of these two liberal champions. I know that they will bounce back and I look forward to seeing them both back where they belong as soon as possible. I was also saddened that Martin Tod lost the Winchester seat, depriving its constituents of another great local campaigner to continue the work of Mark Oaten.

During this campaign I have been able to visit many of the constituencies that fall within our region and we have been running a great positive campaign. I would like to congratulate everyone that put so much work into each contest. The results were mixed, but the impact the Liberal Democrats have had on this election cannot be underestimated. I know everyone will be tired and as we watch the developments in Westminster, our thoughts go to our leaders.