Councils and businesses across the South East are being urged to sign up to a charter aimed at improving transparency in the recycling chain. 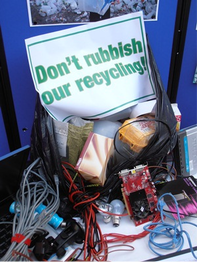 The Resource Association wants local authorities and companies to publish an annual register of what happens to its recyclables.

Catherine Bearder, MEP for the region, has signed the charter and believes more should be done to explain what happens to our rubbish.

She said: "I think we should all know what happens after we put out the rubbish on the kerbside. Do you know how much ends up in landfill, incinerated or recycled?

"If it is recycled, where does it end up? Fewer of us have an 'out of sight, out of mind' mentality when to comes to getting rid of rubbish.

"We want to know when we recycle that it is actually a worthwhile exercise. This charter helps put the focus on councils and organisations to take greater responsibility over where rubbish ends up."

Catherine has been spearheading a campaign 'Don't Rubbish Our Recycling' aimed at encouraging people to cut down on the amount of rubbish they produce.

It also focuses on where waste ends up, with concern about junk being sent to developing countries.

A recent YouGov survey commissioned by the Resource Association has shown a public interest in what happens to the recycling.

It said 73 per cent of adults quizzed did not know where the waste ended up, with 68 per cent saying they would like more information.

Ray Georgeson, chief executive of the Resource Association, believes companies will benefit by signing up to the charter.

He said: "We are pleased to welcome Catherine as a signatory to the charter and support the campaign she has been running to draw attention to what actually happens to the public's recycling.

"Our shared agenda of transparency and improved public information will generate confidence in the recycling industry and how local councils account for recycling collected in their name.

"This can only be good for the industry and encourage people to recycle more, confident the materials are put to good use."

At the moment, councils including Kent and Isle of Wight have signed up, while companies such as Coca Cola Partnership and Smurfit Kappa Recycling are also on board.

Mr Georgeson added: "Transparency of end destination of recycling is a vital part in raising the game on recycling."