Catherine Bearder tells conference it was definitely worth it

Last Saturday Catherine Bearder MEP addressed Lib Dem south central regional conference. In a speech titled 'Was it Worth It? Life after Campaigning', Catherine told Lib Dem campaigners that the opportunity to champion good causes as Member of the European Parliament for the South East makes all those years of hard work on the campaign trail worth it. 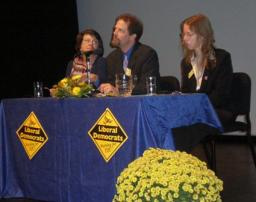 "I have just been asked to prepare a response on the paper that the Commission is bringing to the parliament on the 2011 EU Year of volunteering. Now who would have thought that all those years working in charities helping those in need in my own local communities would have been so useful in preparing me to report to the Parliament!"

Catherine congratulated the Lib Dem campaigners for the work they do and pointed out that an MP or MEP cannot get elected without the help of a network of campaigners within the party. She explained, "I finally got elected, not on my own, but with the help of activists and campaigners in 78 local parties that form the huge region of the South East of England."

Catherine concluded by asking is there "life after campaigning? No such luck, there is still too much to do."

To see the full transcript of Catherine's speech please click the link below.