A campaign to improve EU fishing laws and strike a better deal for fishermen in the South East has been backed by Catherine Bearder MEP. 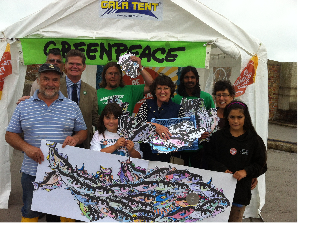 Around 600 people in Eastbourne have signed petition cards in a bid force the European Commission to review its laws on fishing.

Catherine collected the cards at the Rock the Redoubt event at Redoubt Fortress on Saturday afternoon.

She said: "I will make sure these fish cards get to the European Commission and it understands the strength of feeling in Eastbourne and across the south coast.

"At the moment, small-scale fishermen are being punished and yet they are the ones leading the way in sustainable fishing. We cannot allow this to continue."

The event was part of the Be a Fisherman's Friend campaign, which has pulled together fishermen from around the South East and South West in an effort to change the EU Common Fisheries Policy.

Local fishermen, Eastbourne MP Stephen Lloyd and Greenpeace campaigners met Catherine to discuss radical reform of the law, which can be changed only once a decade.

Mr Lloyd said last week: "For better or worse fish law is decided in Brussels and in Catherine, Eastbourne's fishermen have a doughty fighter!"

Greenpeace is encouraging local people to add their voice to the campaign by visiting http://www.greenpeace.org.uk/oceans/beafishermansfriend