Catherine Bearder gave a speech on the importance of EU membership to our jobs, security and environment at the Liberal Democrat Autumn Conference in Glasgow this week. Speaking in favour of the motion "Prosperous, Sustainable and Secure (Europe Policy Paper) she said: 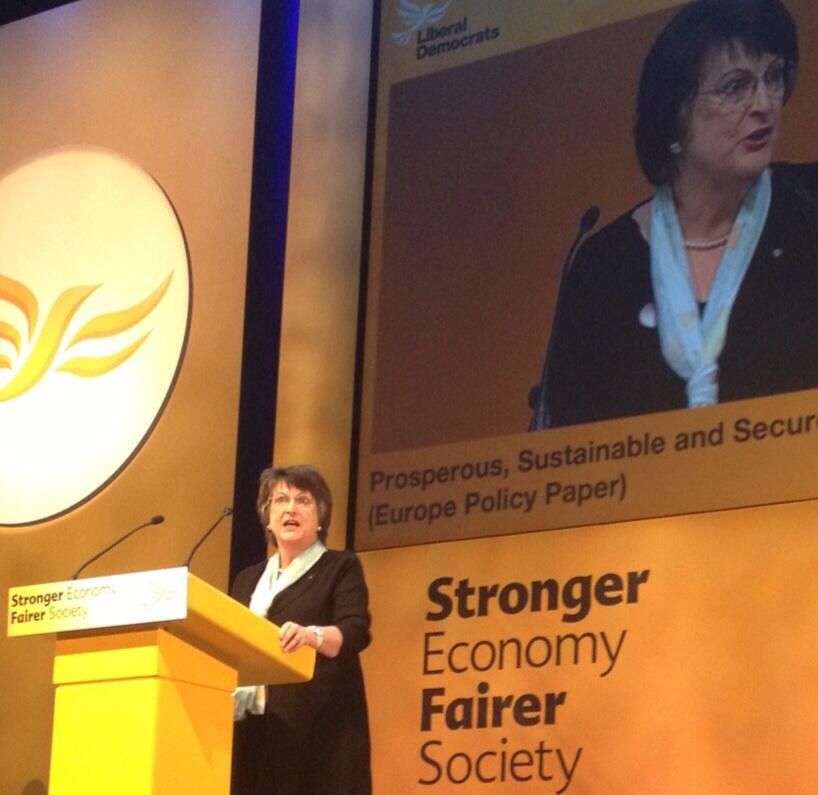 Facing any election takes courage, facing the European elections, given the public's usual distrust of anything European takes something more, courage yes, but grit and determination in bucket loads. Believe me this is my 4th time. My South East region is big, it has a bigger population than 13 of the member states! I know what a huge job we have ahead of us. I am delighted to have Antony Hook as a running mate.

But more than brave hearts we need good policies to be credible. We have this in this policy paper and motion. We need these tools. Policies that are deliverable, make sense to the electorate and most of all Liberal.

This motion recognises the economic benefit of our membership of the EU. It recognises that trade and competitiveness in a global world can only be done with partners who trust each other and work together.

You may have noticed a bit of talk about jobs recently. Liberal Democrats in government are working to deliver a million jobs by 2015.

Well in the South East region alone there are over 300 thousand jobs that rely on a strong trading relationship with the EU. Nationally, it's 3.5 million jobs. To leave the Union would put these jobs under threat.

The message then is clear, in Europe, in work, out of Europe, out of work!

The motion also recognises the benefits of our EU membership on the environment. Air, pollution, migrating animals and diseases don't respect national borders and what affects one country potentially affects us all. If I have a regret, in this motion I would say it says too little about biodiversity loss, but then that's because this is my real focus of attention. As Fiona said at a meeting this week to much laughter: "Catherine has spent a lot of time working with elephants and bees!" I have, but I hasten to say, not at the same time, bees and elephants really don't like each other!

The rise of anti-European voices of UKIP and Tories are changing the focus of the debate in the media. They love characters, and Farage is certainly a strange character!

But the Liberal Democrats are the only party united in our constructive approach to the union. MEPs are working hard to make sure the Liberal voice is heard in the Alliance of Liberals and Democrats for Europe.

We are delivering policies by building coalitions with representatives from across Europe, and from other political groups on a daily basis. Coalitions are MEPs bread and butter.

Nigel Farage purports to be the party of OUT, he is using this to mask his real policies. His agenda is racist and xenophobic. Make no mistake about that.

If we don't face him and his ilk down, then who will? The Tories and Labour are ape-ing UKIP and copying their policies.

We also need to be clear about our line on the referendum.

We also need to start challenging the media agenda, no small ask. I have created a Mythbuster page on Facebook. You will find the answers to the stupid headlines such as Europe is to ban dustbin collections, Milk of magnesia and Mulberry bags.

It's not going to be easy, but Lib Dems are brave and committed to this. We must win for the sake of our economy, our environment and those vital jobs. This motion gives us the tools to do just this.