Last Saturday Catherine Bearder MEP marched through central London with 50,000 people at The Wave. The march was to show the strength of popular will to find an international agreement on tackling climate change at the UN Climate Change Conference in Copenhagen. 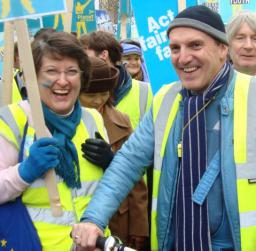 Catherine said, "it's great to see so many people come to shout about climate change."

"My message to whoever is working in Copenhagen is: the world is watching and counting on you all. It's not a question of if or when, but how and now! You cannot fail us or you and the rest of the developed nations will not be forgiven."

"A desire to protect the environment is in the DNA of Liberal Democrats. It's one of the key areas that defines our party and distinguishes us from the others.

"It's not surprising really that we were the only mainstream party with any significant presence at this march. Liberal Democrats have once again shown voters that if they care about the environment and want something done to stop climate change, then ours is the only party they can count on."

Read Catherine's blog on The Wave at Lib Dem Voice.