Bearder calls on EU to speed up release of Greenpeace activists

Catherine Bearder today called on High Representative of the EU Catherine Ashton to press the Russian authorities over the 28 Greenpeace activists, including her constituent Philip Ball, and two freelance journalists currently being detained on charges of piracy. 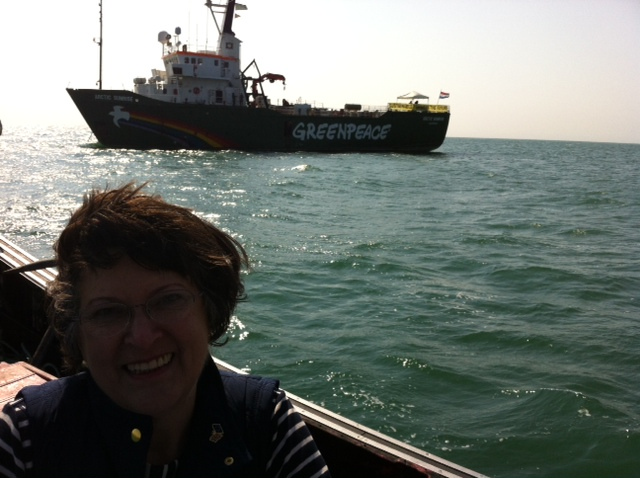 89 MEPs, including nine Liberal Democrat MEPs, have signed a statement of solidarity with the Arctic 30 on the Greenpeace website.

Liberal Democrat MEP for the South East Catherine Bearder met many of the crew members aboard the Arctic Sunrise last June when it docked in Hastings as part of a UK campaign to support endangered local fishing communities. She spoke in support of the activists in the European Parliament today and commented:

"I welcome the news that the piracy charges have been dropped. Even President Putin had admitted it's obvious the Greenpeace personnel and independent journalists accompanying them were not pirates.

"What they were doing is highlighting the risks and dangers inherent in oil extraction in the Arctic region. They were speaking for all of us who, following the Gulf of Mexico Oil spill, worry about extraction in even more vulnerable parts of the globe.

"The European Parliament needs to show we are doing all we can to support them. That is why I am calling on High Representative Catherine Ashton to take up this issue at the next meeting of EU foreign ministers on 21st November, just three days before the activists' pre-detention hearing. That way we can help to secure their release, get them all home for Christmas and start working with Gazprom to really ensure safe exploration in the Arctic.

"My thoughts are with Phillip Ball and his family. I can only begin to imagine what he and his colleagues are going through after being arbitrarily locked up in cold cells and solitary confinement."

"It is encouraging to see that the EU recognises the dangers of drilling in the Arctic's hostile environment. We welcome its concern about the people who protested against Gazprom's reckless plans and hope the growing worldwide movement of support will help to get our activists and the journalists released soon."

So far over 85 MEPs from 20 countries have signed a statement of solidarity with the Arctic 30.