New transparency rules for banks and a cap on bonuses were today (Tuesday, April 16) backed by Lib Dems at the European Parliament. 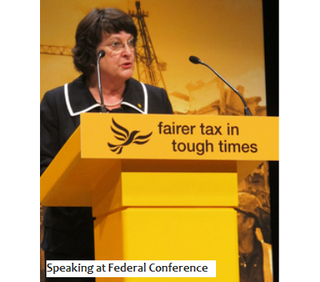 She said: "Capping bankers' bonuses would usher in a much-needed culture change, putting an end to the excessively risky behaviour that led to the financial crisis.

"It is only fair astronomical bonuses should be curbed and replaced by a more long-term, responsible approach, particularly when money from taxpayer-funded bailouts and ordinary savers is at stake.

"But the bonus cap is just one part of a historic package of reforms that will make our banking sector more resilient in future and bring us in line with international standards.

"Multinational banks will now be forced to disclose their tax arrangements in each country in which they operate, helping to ensure that they pay their fair share of tax.

"Furthermore, there will now be an EU-wide 'bankers' blacklist' enabling employers to check whether bankers have been sanctioned for misbehaviour in the past.

"Finally, there are new incentives to get banks lending to small businesses, giving an important boost to growth, jobs and innovation and getting more money flowing again in the real economy."

Full details of the vote can be found here: http://www.europarl.europa.eu/news/en/pressroom/content/20130416IPR07333/html/Parliament-votes-reform-package-to-strengthen-EU-banks