Catherine Bearder MEP has welcomed the positive news that water quality along the river Thames has improved over the last year. 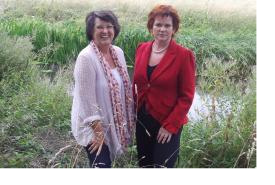 The Environment Agency has announced that over the last year the Thames has got cleaner, according to European standards. The EU Water Framework Directive sets the minimum standards that must be reached for the quality of water lakes, rivers and estuaries. It encourages people to reduce pollution and make our waterways cleaner - and in the Thames that's exactly what it's done.

"I am so pleased by news that work in the South East is cutting pollution and making the Thames cleaner."

"Often we don't realise the effect our actions have on the natural environment."

"We must adapt our lifestyles to limit waste and cut the pollution we create.

"I am told that natural habitats have been saved thanks to a cleaner Thames. In fact, species that were in decline are now in resurgence."

"At the moment 23.7% of rivers, lakes and estuaries in the Thames River Basin District are now recognised as 'good', compared to 27.8% of waterways nationally. The coalition government has set a target of making all of our waterways at least good status by 2027."