A tale of two stories in Colombia

As the European Parliament debates the proposed Free Trade Agreement between the EU and Colombia, MEPs are hearing two deeply contrasting views on the human rights situation in Colombia. 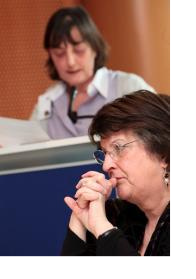 "I feel very strongly that a prize as sought after as the free trade agreement should not be awarded unless our potential trading partner reaches certain standards of human rights and environmental protection."

"Colombia has undoubtedly made improvements, but the EU should not offer such a prize if protection of human rights still falls short of what's acceptable."

"If the human rights situation on the ground begins to improve and wrongdoers are prosecuted, as should be expected from any country wishing to participate in the international community, then Colombia should be congratulated. But to award them with an agreement before there is a visible improvement would be a failure of EU trade policy."

"There is a need for more debate and a clearer picture of what is actually happening on the ground with regards to human rights."