A Fine Mess in Wokingham

Catherine and other Liberal Democrats inspected Ashenbury Park over the weekend after a deluge of comments from residents in Woodley and found dog waste bags hanging on posts where there used to be dog waste bins. Wokingham Borough's decision to mix dog poo with normal litter is disgusting - it may be legal, but that does not make it right for our communities. 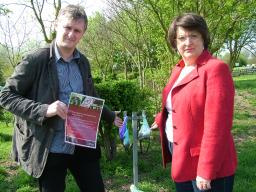 Catherine commented that "judging from the smell from the dog waste in the litter bin this weekend there won't be many people taking a relaxing break or eating a picnic on the benches this summer!"

Local Lib Dem Councillors from all over Wokingham have been told by residents that more dog waste is being left lying in the grass and on pavements since this new policy was implemented by Wokingham Conservatives. Residents valued this important service and the Lib Dem group at Wokingham call on the Tory Executive to bring back the dog bins.