100 years of the State Pension - we should be celebrating, not campaigning

It is now 100 years since the introduction of the State Pension, but today Catherine was helping pensioners in Oxford collect signatures for their petition to bring the State pension back to the level it was 100 years ago. 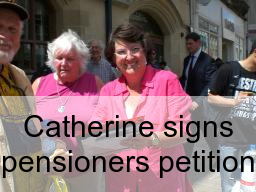 When the pension was introduced in August 1908 it was set at 25% of the average working mans' pay, today it is just 13%. Pensioners are working to collect signatures all over the South East and Catherine was helping them in the centre of Oxford on Friday.

The stark facts about the state pension are these;

1 in 4 of today's 11 million pensioners live below the poverty line and the majority of these are women.

The majority of pensioners with company pensions receive less than £3,000 from them

"Treating our older fairly should be the mark of a civilised society" said Catherine, "the Liberal Democrats believe that as many people as possible should have sufficient state and private pension rights to lift them clear of means-tests. Retired people should not be living on a cliff edge, I am happy to support the campaign for a fair State pension."