We must act now to protect the lion

Strategies to discuss the protection of lions were discussed today by representatives of the charity LionAid and the European Commission in a meeting arranged by South East MEP Catherine Bearder. 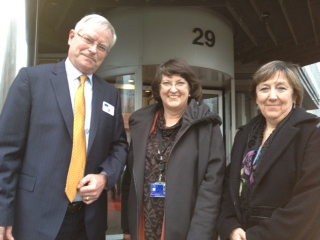 Catherine has been working with LionAid towards a ban on the import of lion trophies into the EU and arranged the meeting with members of the EU's Environment Commission so they could raise their concerns and discuss the options for the future.

Dr Pieter Kat and Chris Macsween of LionAid stressed how African lions are increasingly threatened and endangered with over 90% decline in the past 50 years.

Lions in Africa have declined in numbers from 200,000 in the 1960's to less than 25,000 now. While such declines are influenced by a number of factors, such as habitat loss, diseases and conflicts with humans/livestock, Catherine and LionAid highlighted that sport hunting is the biggest driver for the decline and should be immediately removed. Catherine is calling for more action to be taken at aninternational level to protect these species from extinction.

Catherine, who joined LionAid in condemning the decision of the UK Independence Party to list a lion trophy in its fundraising auction at their party conference last year said:

"I was pleased to be able to invite Pieter and Christine over to Brussels to meet those who influence the decisions they campaign for.

"We made good progress today but the fight will not stop here. I look forward to working with LionAid further towards a complete ban on the sale of Lion skins as a first step to protecting these beautiful animals.