A team from Tunbridge Wells took part in the Nick Clegg Million Door Challenge yesterday (31st Jan). Local members were joined by European campaigner, Catherine Bearder when they braved a very chilly wind to knock on the doors in Tunbridge Wells. 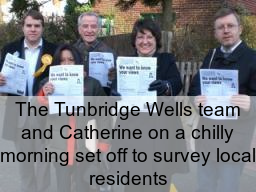 Over 300 doors and seven streets were covered as the team delivered local resident's survey forms. The response was tremendous and lots of interesting aspects about the local area were reported.

"I was delighted to be able to come along and help in this vital local work" said Catherine, "It is great to see such a welcome in a town where the Liberal Democrats are working so hard. One previous Labour supporter said to me that he thought that this was one of the very good things about the Lib Dems - that they ask and listen to local resident. He said he wished the Labour government would do the same!"

The local team will be continuing knocking on doors to count towards the million door target that Nick Clegg has set Liberal Democrats to achieve before the European and local elections in June. Catherine is keen to help with this quest across the South East Euro region.