Trafficked sex workers on our doorstep

Commenting on the report by the Association of Chief Police Officers (Acpo), which revealed for the first time the true scale of human trafficking across the South East of England, Euro MP and anti-Trafficking campaigner Catherine Bearder MEP said: 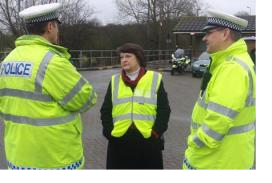 "People need to be aware human trafficking doesn't just affect other parts of the world. It isn't just someone else's problem; it's our problem and this report shows it's happening on the doorsteps of South East England."

"Women smuggled into the UK often don't know they will be used as prostitutes, but are forced into selling their bodies to pay off a £30,000 'debt-bond'."

"The report refers to 820 women from Asia alone found working in South East England under these circumstances."

"Earlier this year a shelter for trafficked women here in Hampshire had to close because of funding problems. Now more than ever we need to make sure these projects are funded so victims of trafficking can be saved from the gangs that treat them as commodities."

426 brothels were investigated across the South East in the study. The third highest number in England and Wales.

Nationally, at least 2,600 women were confirmed as being trafficked into England and Wales who were forced to work as prostitutes in brothels like the 426 on our doorstep.