Time to end the roaming rip-off

The rise of the iPhone, Facebook and Twitter means more needs to be done to end the roaming rip off faced by holidaymakers, says local Euro MP Catherine Bearder. 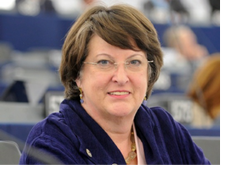 People using their mobile phones on holiday are still likely to return to huge bills despite efforts to cuts charges in recent years. South East MEP Catherine has now added her voice to those calling for phone use abroad to cost the same as it does at home.

"Returning home from holiday is depressing enough without finding a massive mobile phone bill waiting for you. People have come to rely on being able to access the Internet on their phone but even checking Facebook and Twitter while abroad can lead to hefty charges from the networks.

"It's time to end this roaming rip-off. Calling, texting or using the Internet from your mobile should cost the same wherever you are in the EU. The only reason it doesn't it because of the greed of the networks. They have tried to block every move we've made to reduce charges because they know how much people depend on their mobile phones.

"We end up in the situation where people are terrified of using their phone abroad because they worry costs could quickly escalate. Having a fair, flat rate would help people keep in touch and provide peace of mind for holidaymakers and business travellers.

"As the recent ruling on watching Premiership football through foreign decoders shows, there is a clear determination at a European level to break down barriers which artificially inflate prices for consumers."