Blue flags are flying on more beaches run by Thanet District Council than in any other part of the country, Keep Britain Tidy said today (Wednesday, May 22). 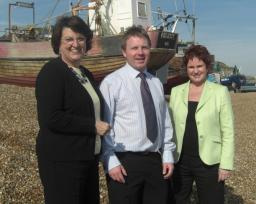 The Kent authority has claimed the title for most exemplary blue flag beaches with eight, while the South East now has 15 in total - down from 20 last year.

New European Union regulations have meant stricter water quality standards in an effort to ensure beaches are cleaner than ever before.

Catherine Bearder, a Member of the European Parliament for Kent, said the flags offered peace of mind for people visiting the seaside this summer.

She said: "The Blue Flag rewards efforts to make sure our beaches are safer places to spend the day, and that has certainly been done in Thanet.

"We understand more and more the need to look after our shorelines for both the environment and the economy. Hopefully, this offers an added incentive for families planning a summer holiday at the English seaside."

You can see a full list of blue flag beaches at: http://www.keepbritaintidy.org/News/Default.aspx?newsID=1130