Teaming up to tackle wildlife crime

An international effort is urgently needed stop the illegal trade in wildlife which is bringing species closer to extinction. 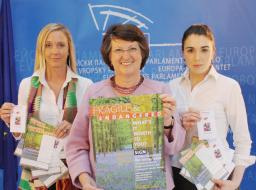 Catherine Bearder, an MEP for South East England, has spent years battling to protect biodiversity and has backed an action plan aimed at curbing wildlife crime.

She said: "Last year an elephant was killed by poachers every 15 minutes and we live in a world where a rhino horn is now worth half a million Euros.

"It is frightening to think fewer tigers, pandas and rhinos are left in the wild because once they are extinct, they are gone forever. There are just not enough people who realise the extent of this problem."

Dutch Liberal MEP Gerben-Jan Gerbrandy sketched out ideas for a European plan to fight the trade in endangered species ahead of the CITES conference in Bangkok next month.

He believes action should be taken to save iconic species, but also stop rebel groups and terrorists earning huge profits from poaching to finance weapons. It is thought wildlife crime is worth around 14 billion Euros each year.

She added: "Developing countries cannot be left to fight these battles on their own. I will be doing all I can to make sure the EU plays its part."