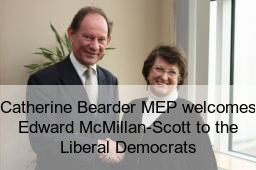 This week McMillan-Scott, the Tories' longest serving and most senior MEP, joined the Liberal Democrats citing as the reason the Conservative Party's shift in Europe to "totalitarianism and the extremism and religious persecution it brings."

McMillan-Scott stood for Vice-President of the Parliament against Michael Kaminski, leader of the Tories' group in Europe, who he characterised as representing "disguised extremism". He has long been an outspoken critic of the extremist and intolerant members who the Tories have now chosen as their European allies.

"For many years Edward has fought hard to protect human rights and to defend democracy across Europe. His experience is a welcome addition to the already strong Lib Dem group in Brussels."

"The Conservatives cannot be trusted in Europe to uphold the British values of fairness and decency. Instead they join with extremists and argue for isolationism."

"The Liberal Democrats are the only choice for those who want the best for Britain in Europe."

"In the South East we have a number of Europhobic MEPs that will spin their lies about Europe to win votes. But in today's interdependent world it's in Britain's interest to work with our neighbours."